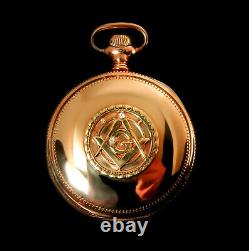 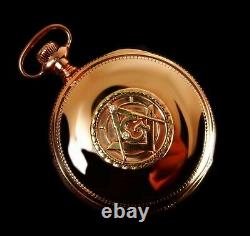 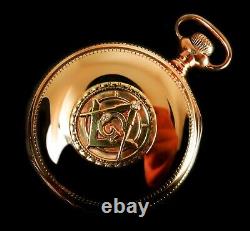 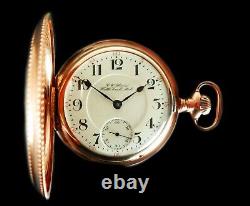 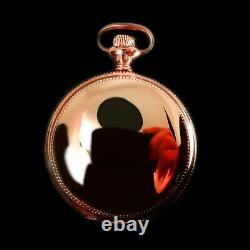 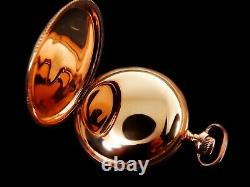 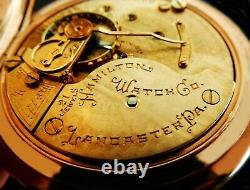 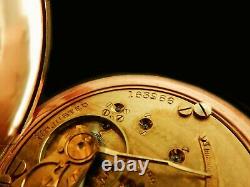 Up for sale is a Rare Beautiful Antique Railroad 21J 18s Hamilton Private Label Grade 943 Special Pocket. Case with Masonic Symbol with two Diamonds on the cover. The movement has a serial number.

163266 which dates it to be manufactured in 1904. SUPER CLEAN, EXCEPTIONALLY NICE, VERY SCARCE VARIANT.

It's Stem Wind and Lever set, Adjusted to 5 Positions, Temperature. The watch was recently serviced, running STRONG and keeping an excellent accurate time. Please look closely at the pictures as they part of the description.

Another form of pioneer was building a factory in the pastoral community of Lancaster, Pennsylvania. The Adams and Perry Watch Company was built right beside the turnpike. Its founders possessed a good combination of skills: Mr. Perry was a watch designer, and Mr. Adams was an organizer and promoter. They brought skilled watchmakers to Lancaster and began production in 1875. Like so many infant industries, Adams and Perry did not have enough capital to market their product. The Lancaster Watch Company continued to suffer growing pains and was reorganized again in 1884, this time as the Keystone Standard Watch Company. Nevertheless, the financial problems persisted until 1892. In that year, the Hamilton Watch Company came into existence as a result of yet another reorganization.

The name, Hamilton, was selected to honor Andrew Hamilton, original owner of the Lancaster site on which the factory was situated. Hamilton was granted the land by William Penn's heirs and is credited with founding the city of Lancaster with his son James. Hamilton Watch was founded by merging Keystone with the Aurora (Illinois) Watch Company. Aurora machinery was moved to Lancaster in summer of 1892.

The rugged, precision watch that Hamilton produced became a favorite among railroad watch inspectors and personnel. In fulfilling the railroads' requirements for accuracy, it also filled the needs of the general public for a timepiece of high quality. By the turn of the century it came to be known as Hamilton The Railroad Timekeeper of America.

During World War II, Hamilton ramped-up production of several models of chronometer to meet the US Armed Forces (particularly the US Navy's) need for an extremely accurate timepiece which could be used for navigation at sea. Prior to WWII, such highly accurate instruments were only produced abroad. The first Hamilton chronometers were delivered to the Navy in February 1942, and at their peak Hamilton was making 500 chronometers per month! Hamilton Model 23 Military Chronograph was widely used during WWII as a navigator's "stop-watch". Based on the super-reliable 992B with Elinvar hairspring and mono-metallic balance, the Mod 23 adds a chronograph mechanism, making it one of the most complicated watches produced by Hamilton. Hamilton has always been on the forefront of horological innovation. The Elinvar hairspring was patented in 1931 and used in all movements thereafter. The name Elinvar was derived from the term "Elasticity Invariable" and was the first alloy to resist the changes in elasticity that occur with changes in temperature. In January 1957, Hamilton introduced the world's first electric wristwatch, a breakthrough for the industry and the first basic change in portable timekeeping since the early 16th century. Powered by a tiny 1.5 volt battery guaranteed to run the watch for more than a year, the new watch completely eliminated the need for a mainspring.

Hamilton continued to produce some of the finest American watches until 1969, earning them the distinction of being the only American watch company to survive global competition will into the 20th century. They truly represent the pinnacle of American watchmaking. The item "Mega Rare Masonic Antique Railroad 21J 18s Hamilton 943 Pocket Watch Serviced" is in sale since Tuesday, June 29, 2021. This item is in the category "Jewelry & Watches\Watches, Parts & Accessories\Watches\Pocket Watches".

The seller is "exlusivewatches" and is located in Mount Arlington, New Jersey. This item can be shipped worldwide.