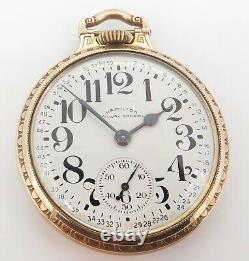 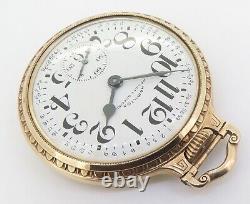 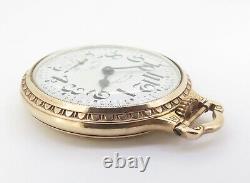 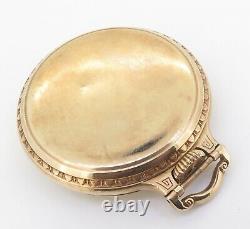 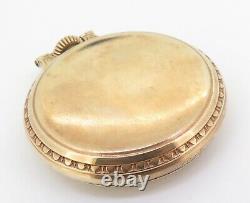 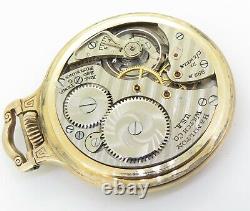 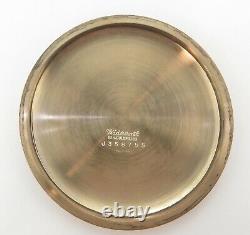 The manual wind 21 jewel 16s lever 992b railroad special chronometer movement with its original finish is working but will need a service in the near future, fully signed Hamilton Watch Co. Adjusted to temp 6 Positions. The large 50.8mm yellow gold filled fancy case with screw front & back is in nice original condition, wear to plating on case back consistant with age and winding, case is. Signed Wadsworth 10 karat gold filled. Dont miss this one in pre owned condition.

We are constantly adding to ever increasing range and have a large assortment of American Railroad Grade Pocket Watches. Were amongst the highest grade watches made, having been made for the railways makes them a great choice to use every day, mainly for their durability over time.

Their lower production quantities and of course their high grade movements make them also a great gift or investment. A typical railroad's requirements for a pocket watch in the early 20th century might include. Only American-made watches may be used (depending on availability of spare parts). Only open-faced dials, with the stem at 12 o.

Minimum of 17 functional jewels in the movement. Size 16 or 18 only. Maximum variation of 30 seconds (approximately 4 seconds daily) per weekly check. Watch adjusted to at least five positions: Face up and face down (the positions a watch might commonly take when laid on a flat surface); then crown up, crown pointing left, and crown pointing right (the positions a watch might commonly take in a pocket).

Lever used to set the time (no risk of inadvertently setting the watch to an erroneous time, when winding the watch with the stem). Anti-magnetic protection (after the advent of diesel-electric locomotives). The minimum requirements were raised several times as watch-making technology progressed, and the watch companies produced newer, even more reliable models. By WW2, many railroads required watches that were of a much higher grade (as many as 23 jewels, for example) than those made to comply with the original 1891 standard. Please pay within 3 days.